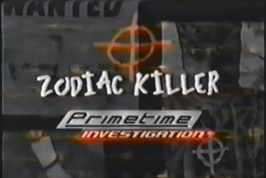 In October 2002, the ABC television show "PRIMETIME THURSDAY" compared Arthur Leigh Allen's DNA, to what was believed to be the DNA of the Zodiac killer. There was no match.

In 2003, due to Allen's alleged habit of having others lick his stamps and envelopes (Allen claimed the taste of glue made him sick), the San Francisco Police Department obtained a voluntary DNA sample from Allen's former best friend, Don Cheney. Cheney's DNA was then compared to the DNA of the Zodiac, with a negative result.

In 2018, it was revealed that the "Zodiac DNA" that was used in the 2002 TV show, was actually a DNA sample found on the outside of a stamp the Zodiac had used. Thus, the sample could have been the DNA of any number of individuals, including investigators.